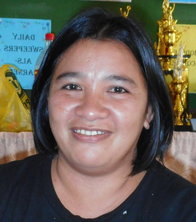 Catherine Padernal, 32, is a determined woman.

The mother of seven successfully completed her secondary schooling with the Alternative Learning System (ALS) in 2014.

Prior to studying ALS in the Manzana barangay in San Jose, Catherine was working as a street vendor and her husband had no stable work.

“We suffered a lot. We ate rice only. Sometimes my children [were] crying from hunger,” she says, her voice quivering as she blinks back tears.

Her dire situation encouraged her to apply for ALS when she first heard about it in 2013.

“That forced me to study because education is very important,” she says.

“For a better job, you must finish studying.”

Catherine would know. After her parents separated, she left school at 14 to marry her husband.

“I married early because I could not deal with my family but I realized that was wrong,” she says.

However, her marriage has been successful as the couple have been together for 20 years.

“We are getting stronger and stronger,” she smiles.

Catherine says her most unforgettable experience while studying with ALS was sitting the examination.

“Many people underestimate my personality. That’s why I told myself I will go to the examination,” she says, wiping back tears.

“I want to go to the examination because I want to change my life.”

Catherine’s hard work paid off and she is now studying to be a teacher at Partido College in Goa.

She wants to help others.

“There’s some places [people] do not know how to read… and write. So I am very sad for that,” she says.

“If someday I become a teacher, I will go to that place and share my wisdom.”

She says she prays to God that she will finish college.

“If I become a teacher, my first salary I will distribute to the poor, especially the poor families. I have a heart for that because I am poor,” she says.

Catherine said other Filipino families who are going through financial hardships should not underestimate themselves.

“I know that education is money,” she says.

“So many students stop their study because of the initial money. For me, you need determination and [to] pray to God.”

To get by, she runs a business while studying at college.

“I wake up at 1am because I make food to be served in the high school canteen,” she says.

“So the first time I go to school, I felt sleepy because I need to wake up early to prepare all the dishes,” she says.

Although Catherine remains busy, she understands the importance of education.

She is proud to have been part of ALS, especially when she received her diploma.

“I was very proud and happy,” she says.

She is also very thankful to her ALS teacher, Myr Shirley.

“She is a very good teacher. She does her best to teach us,” she says.

Catherine also enjoyed the flexible learning options with ALS, particularly when she asked her 14-year-old to help her with her humanities project.

“I don’t know how to dance,” she smiles.

“My daughter’s very good at dancing. That’s why she danced for me [as part of my humanities project].”

However, Catherine directed her daughter and, together, they were declared the winners.

Catherine asks the youth to give priority to study.

“They must prioritise education,” she says.
​
“It will give them a better life.”